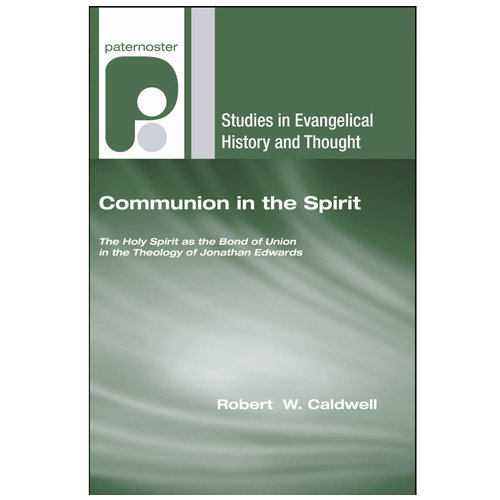 Communion in the Spirit: The Holy Spirit as the Bond of Union in the Theology of Jonathan Edwards

Communion in the Spirit: The Holy Spirit as the Bond of Union in the Theology of Jonathan Edwards
By Robert W. Caldwell
Paperback Read more

While he was well known for his lifelong fascination with the nature of religious experience, the colonial American pastor and theologian Jonathan Edwards is seldom associated with a specifically Trinitarian spirituality. This study explores the central connections Edwards drew between his doctrines of religious experience and the Trinity: the person and work of the Holy Spirit. Edwards envisioned the Spirit's inter-Trinitarian work as the affectionate bond of union between the Father and the Son, a work that, he argued, is reduplicated in a finite way in the work of redemption. Salvation is ultimately all about being drawn in love into the Trinitarian life of the Godhead. This study takes us through the major regions of Edwards's theology, including his Trinitarianism, his doctrine of the end for which God created the world, his Christology, and his doctrines of justification, sanctification, and glorification, to demonstrate the centrality of the Holy Spirit throughout his theology. ""Much has been said about Edwards' remarkable vision of the God of Scripture, but comparatively little about the way that vision was rooted in the Triunity of God. For this reason this new work is welcome, for Caldwell shows us that Edwards was first and foremost a Trinitarian theologian. His work is doubly welcome for the way that Caldwell also argues that Edwards' Trinitarianism turns on a familiar theme of western theology--the Holy Spirit as the bond of union within the Godhead--and then details how this pneumatological perspective informs a number of key areas of Edwardsean thought. In a word, this is a valuable work that deserves a hearing in the current renaissance of interest in the theologian of the eighteenth century."" --Michael A. G. Haykin, Toronto Baptist Seminary and Bible College ""This work makes an important contribution to the increasing attention on Jonathan Edwards as theologian. By offering a sustained study of Edwards's pneumatology, Professor Caldwell insightfully reveals a prominent yet under emphasized feature of Edwards's thought. This book not only deftly argues for Edwards's pneumatological insight as central to his thought, it also makes a compelling case that the recovery of Edwards's insight can revitalize contemporary theology. A must for those who think Edwards still has something meaningful to say to the church."" --Stephen J. Nichols, Lancaster Bible College and Graduate School ""Edwards once wrote that, 'All divine communion, or communion of the creatures with God or with one another in God, seems to be by the Holy Ghost.' This doctrine of union, or communion, as effected by the Spirit, lies at the heart of Edwards's thought--animating almost everything else he wrote about God and the world. Today we enjoy many hundreds of books and articles on Edwards, yet until now no one has ever published a monograph on this subject. Robert Caldwell's brilliant study deserves a wide and careful reading by those who claim to know, or want to know, about Edwards's theology. It addresses his pneumatology, his doctrine of the Trinity, Christology, soteriology, and eschatology. It goes a long way toward explaining all that Edwards thought was involved in the claim that the Spirit is the love of God personified."" --Douglas A. Sweeney, Trinity Evangelical Divinity School Raised in western New York state, Robert W. Caldwell III was educated at Northwestern University and Trinity Evangelical Divinity School where he specialized in the theology of Jonathan Edwards. He is currently an Assistant Professor of Church History at Southwestern Baptist Theological Seminary in Fort Worth, Texas.