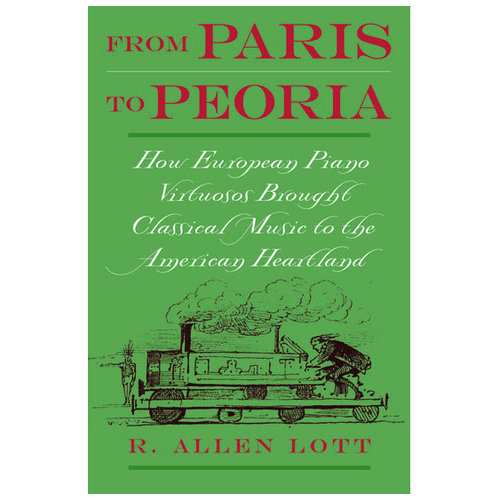 From Paris to Peoria: How European Piano Virtuosos Brought Classical Music to the American Heartland

It's difficult to imagine Franz Liszt performing in Peoria, but his contemporary and foremost rival, Sigismund Thalberg, did just that. During the mid-nineteenth century, Americans in more than a hundred cities--from Portland, Maine to Dubuque, Iowa to Mobile, Alabama--were treated to
performances by some of Europe's most celebrated pianists. From Paris to Peoria deftly chronicles the visits of five of these pianists to the America of Mark Twain. Whether performing in small railroad towns throughout the Midwest or in gold-rush era California, these five charismatic
pianists--Leopold de Meyer, Henri Herz, Sigismund Thalberg, Anton Rubinstein, and Hans von Bülow--introduced many Americans to the delights of the concert hall. With humor and insight, R. Allen Lott describes the glamour and the drudgery of the touring life, the transformation of American audiences
from boisterous to reverent, and the establishment of the piano recital as a viable artistic and financial enterprise. Lott also explores the creative and sometimes outlandish publicity techniques of managers seeking to capitalize on prosperous but uncharted American markets. The result of
extensive archival research, From Paris to Peoria is richly illustrated with concert programs, handbills, caricatures, and maps. Certain to delight pianists, musicologists, and historians, From Paris to Peoria is an engaging, thoroughly researched, and often funny account of music and culture in nineteenth-century America.