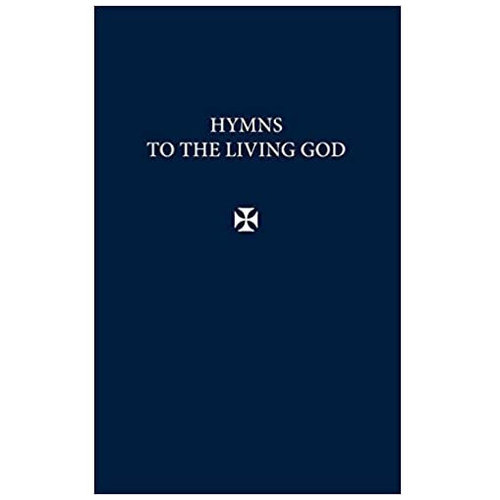 Hymns to the Living God Navy

This book of hymns is a modest attempt to collect some of the best congregational songs available in the English language. Herein are compiled texts and tunes with sources ranging from ancient Israel, North Africa, Syria, Greece, Italy, Germany, France, Spain, England, Scotland, Ireland, and America, covering a time period extending from 2nd C. BC through 2017. Translations into English come from sources originally written in Hebrew, Greek, Latin, German, French, Spanish, and more. This collection is truly universal in its scope.

This selection of hymns has been based on the central criterion of fidelity to biblical truth. What a church sings has often more impact upon the theology, devotion, and behavior of its members than the church’s doctrinal confession or even what a pastor preaches. It is therefore important that a church sings only what is biblically true.

This is the primary reason an emphasis has been placed upon Scripture-based hymns in this collection. Hymns that are close versifications or paraphrases of Scripture are clearly marked, and an index of these hymns has been provided, as well.

A song’s truthfulness has been assessed on at least three bases. First, hymn texts that are theologically rich and sound have been chosen. In most cases, preservation of each author’s original text as been the goal, particularly for hymns written in English. Some alterations have been made for translations into English, especially updating archaic pronouns, as long as those changes did not sacrifice poetic integrity. In a few minor cases we have made changes for doctrinal reasons.

Second, only those texts we believe correspond to Scripture on a poetic level have been chosen. Poetry is not merely decorative—it is an essential part of the communication of truth. The poetry of hymns expresses not just the what of biblical doctrine, but also how God chose to aesthetically present His truth in Scripture. Therefore, hymns whose poetry shapes the affections and imaginations of worshipers in ways similar to how Scripture does have been selected.

Third, hymn tunes that best communicate the kinds of sentiments and affections that are fitting with biblical truth have been chosen. Like with poetry, musical form is not neutral; rather, melody, harmony, and rhythm combine to give expression to right affections.